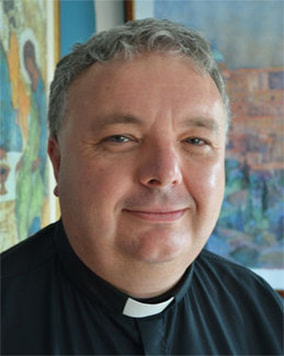 Fr Jonathan was born on May 13th 1967. He studied for the priesthood at St Mary's College, Oscott and was ordained a Priest on July 12th 1992 at his home parish of St Mary Immaculate in Warwick. In 1991 he moved to the American College of the Catholic University of Louvain in Belgium in order to complete his seminary formation and pursue theological studies. Fr Jonathan was awarded a Licentiate Degree in Theology the following year.

​On his return to England, Fr Jonathan took up his first post as Assistant Priest at St. Patrick's, Wolverhampton from 1993-1994. His interest in Catholic education led to his appointment as Religious Education Adviser to Catholic primary schools in the Archdiocese and he took up residence at the Maryvale Institute in Birmingham.

In 1995 his office was moved to Coleshill and Fr. Jonathan was appointed to the parish of St. Thomas More, Coventry to reside with Monsignor Thomas Gavin.

​In 2018, after 14 years at St. John Vianney, Coventry he was appointed Parish Priest of Sacred Heart and Holy Souls. He is a trustee of the Archdiocese of Birmingham and serves as lead trustee for Catholic education. In 2021 he was appointed a Canon of the Chapter of the Metropolitan Cathedral of St Chad and in July 2022 appointed by the Archbishop be the Dean of the Birmingham North and East Deaneries. 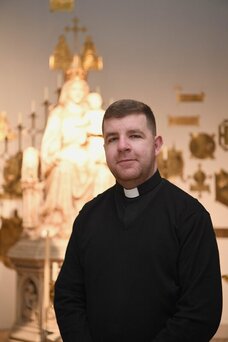 Fr Alex was born on January 5th 1990 at Queens Hospital in Burton-upon-Trent.

In 2013 Fr Alex was accepted for priestly formation for the Archdiocese of Birmingham and spent a propaedeutic  year at the Royal English College in Valladolid, Spain.

After completing a blessed year in Spain, Fr Alex was sent to St Mary's College, Oscott the seminary of the Archdiocese of Birmingham. He was there until leaving officially in June 2020. The last few months of formation were completed based in his home parish during the first lockdown of the Coronavirus pandemic.

Because of the pandemic the original ordination date was changed from 18th July to 12th September 2020. Happily, Fr Alex was ordained by Archbishop Bernard Longley and appointed to assist Fr Jonathan Veasey in Acock's Green in August 2020, taking up post a few days after ordination in September 2020.